How are buildings made of?

The traditional structure of Gjirokastra is built with stone walls and wooden tying elements. Because of the rocky terrain, the foundations of the houses were not going too deep…

Have a look at the following image of a stone masonry section. Click on the right spots (hotspots) to identify the materials at the different layers of the wall. 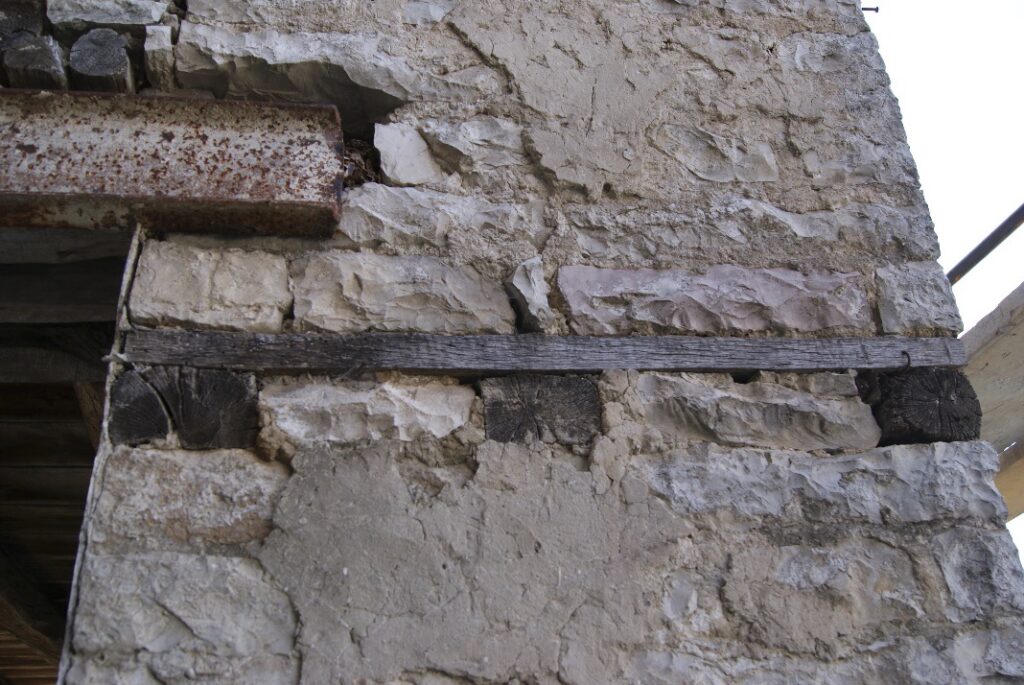 Photo of Timber ties on a building. Source© CHwB A.

Illustration of how a timber tie looks inside a bearing wall. Source© https://esg.pt/3dpast/platform/gjirokastra-berat/images/building-culture/drawings/spaccat-muro.jpg

Besides the stone walls, we also find timber frame walls in the traditional houses of Gjirokastra used as partition walls in the interior and bearing walls in the upper front facades of the houses. These timber structures in the facades allowed for an opening space and more windows on the upper floor, securing a lot of light in the big rooms. There are three types of timber walls found in Gjirokastra’s houses. The most common one is called çatma. 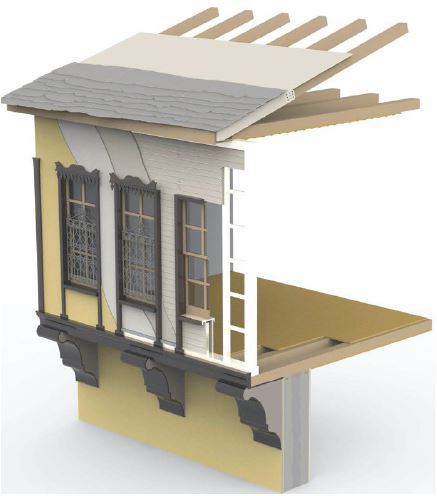 There are two other types of timber walls which are famous in the city. Who would you ask to tell you more about them?

The roofs in Gjirokastra houses are made of timber structure covered with stone slates. The wooden elements used in the structures have small sections and are very dense to support the heavyweight of the stone cover. These complex structures show the high level of knowledge and skills of the masters building them.

The role of the roof to cover and protect the building from the rain is extended to the eaves. They are usually wide and supported by short or long timber elements, called testek. Can you identify the short and long timber elements as well as the stone slates in the image below?

Mortars were used as binding materials in the masonry structures of Gjirokastra. However, the usage of these binding materials was limited either because of the lack of water resources in the area or as a method to avoid the penetration of the humidity in the interior of the buildings.

There are two types of mortars found:

The clay mortar is usually mixed with a little lime, while the lime-based mortars are a mixture of lime and sand collected from the river.

Plasters and renders are clay or lime-based and are usually applied in two layers. The upper layer is always prepared by lime and goat hair (!) applied in a layer up the 5mm thick. The goat hair makes this layer more elastic and also creates thermo-insulation protection for the building. The clay-based plaster is a mixture of clay and straw, and sometimes a little bit of lime is added too. The lime-based plaster varies. There are examples of mixtures of sand, lime, and straw but also examples with only lime and sand. It is like a cocktail of materials!

Last but not least, a special type of plaster is used to cover the interior walls of the water cistern rooms. This plaster is called horasan and has hydro insulation properties. Can you imagine why? 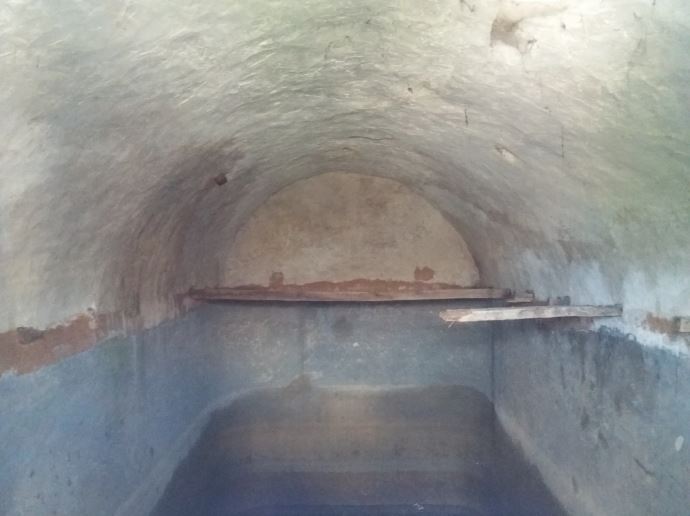 Jaho house, the interior of the water cistern. © E.Mamani. 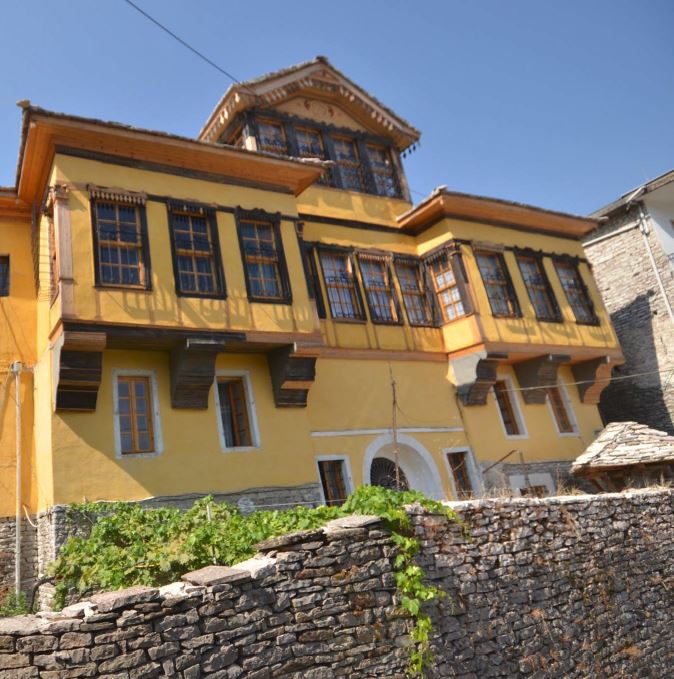 In the following activity, try to match the correct sequence of the construction process of a building. It is about a local tradition where the craftspeople related to the building procedure are involved in a series of activities before, during, and after the building’s construction. The activity is based on notes by Sedat Kale, the historian.

Find the correct sequence of the construction process of the traditional Gjirokastra houses where the owner and the master craftsperson, the head of buluk, are involved…

The latter half of the 19th century has brought some important changes. As the economic exchange with other countries grew and given its long stability, in a social context, one can trace the formation of an Albanian bourgeoisie. These changes are reflected to house design, bringing about larger windows in upper floors and facades, which started to get rendered.

An interesting example of the evolution of the Gjirokastra houses at the beginning of the 20th century is the Fico house built in 1905. The composition of the house follows the traditional form, however, the treatment of the interiors and especially the façade of the house makes it very different from the houses built until that period. The interiors are simpler while the façade is decorated with wooden elements that seem to be influenced by late baroque.