Gjirokastra developed from the need for a new centre of exchange between the agricultural zone of Drino Valley and Kurvelesh and Zagoria’s farmland. The position of Gjirokastra allows trade and exchange among regions. Its simple interconnectivity with other centres and valleys (Kardhiq, Delvina), economic trades (Kurvelesh, Zagoria, Pogon), and the trade road’s nearness Ioannina, Adriatic sea, and inland territories secured and confirmed the Gjirokastra’s role as a regional centre. 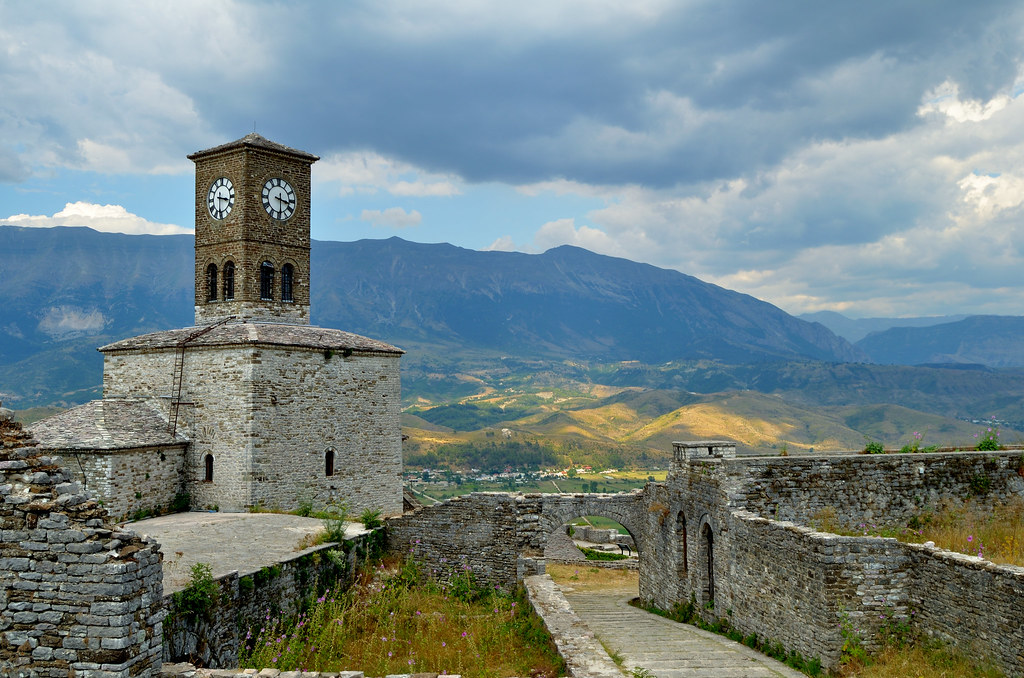 “Gjirokaster” by Erre Taele is licensed under CC BY-ND 2.0

The Ottoman invasion and the inhabitants’ continuous fights to safeguard their living places and freedom caused economic damage and decreased Gjirokastra population numbers. During the years 1415-1418, lots of people migrated towards Peloponnese and islands near Ioannina. However, the Castle of Gjirokastra was turned into an administrative centre of Ottoman military forces.

Later, in the 18th century, the city had 15.000 inhabitants, among many were craftsmen working with leather works, looms, metal works, construction, trade etc.

Gjirokastra, like other urban centres set up on sloping terrain, traces its origin to its castle. In this large and more characteristic group of Albanian towns, Gjirokastra stands out for the diversity of its landscape, which has produced the special characteristics of its quarters, as well as the great dynamism of its composition.

The castle of Gjirokastra is undoubtedly one of the most magnificent constructions of the city. Judging by its present condition, it has gone through two construction stages. At its first stage, it was not fortified on its southwestern side. This section of the fortification, which constitutes the second stage, belongs to the construction activity of Ali Pasha Tepelena, the years 1811-1819. As soon as he seized the fortress, Ali‐pasha started with construction works. Master Petro from Korca was a principal builder.

Have a 360° virtual tour inside the castle:

As seen in the previous lesson, that profound intervention caused the loss of past traces. Medieval walls were included within the new walls or were demolished to create space for the new fortification’s multiple underground environments.

During the 2nd World War, the Castle was used as a refuge, and immediately after the war, the Castle’s prison was utilized for keeping political dissidents. The brighter history of the Castle is certainly a decision to hold a national folklore festival in 1968 and develop and open an Arms Museum in 1969. A new stage for the festival was erected in 1984, and this was one of the last larger interventions the castle has had.

Worthy of mention is the about 10 km long aqueduct of the castle, which brought water from the Sopot Mountain. The construction of this engineering project was during the years 1811-1812. The prison was built using stones from deteriorated remains of the aqueduct.

The Old Bazaar is one of the interesting features of the development of the city. The bazaar was first time mentioned in 1432 by Evlija Chelebi. It seems that the Old Bazaar was developed simultaneously as the Castle, serving as a place for exchange and trade. Given its central position and history, it appears that the town of Gjirokastra has been a cultural meeting point for the Greek, Roman, Byzantine, and Ottoman cultures.

However, in the 17th century, Chelebi also testifies to another Bazaar built in the city’s centre. It seems both Old and New Bazaar were functioning in parallel for some time. But the Old Bazaar’s function slowly died out due to more space and newer amenities of the New Bazaar.

Visit virtually the oldest and largest surviving mosque from 1757 and discover its various architectural features: